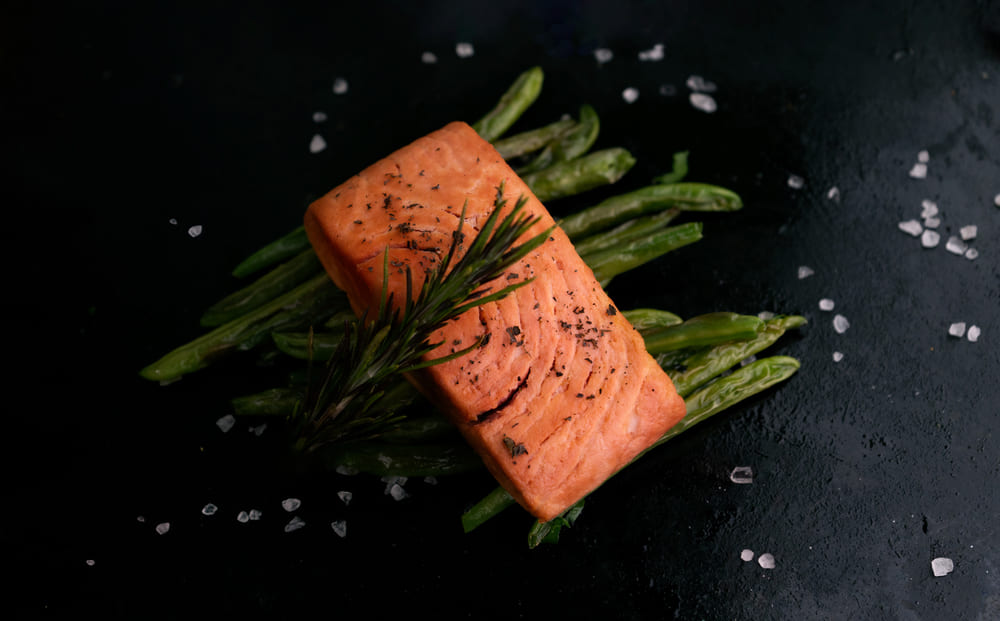 The first-ever texturized salmon fillet of generation 2.0 has been revealed at Revo Foods’ “Have a Taste of the Future” tasting event at Zoku, Vienna. On the 30th of May, 2022, ten journalists and gastronomy experts gathered at one of the most spectacular terraces of Vienna. There they had the opportunity to enjoy a three-course meal prepared by the Austrian Michellin Chef Siegfried Kröpf. The menu included appetizers with Revo’s popular smoked salmon slices and its upcoming fish spreads. But the main focus was on the “gamechanger” salmon fillet. Chef Kröpf prepared a dish that paired the fried plant-based fillet with asparagus, cherry tomatoes, potatoes, and sauce hollandaise. The revolutionary new product will be available on the market already in 2023!

“The structure is almost ‘too perfect’, are you sure this is vegan?”, one of the attendees asked our team members.

Although plant-based fish burgers and fish sticks have already entered the global market, developing a texturized fish fillet has been a great challenge. Revo Foods’ scientific team developed the first vegan salmon fillet of the so-called “generation 2.0”. Unlike the products of the first generation, which were mostly based on tofu, Revo Foods’ game-changer salmon fillet perfectly mimics the taste and texture of conventional salmon. Based on pea proteins and algae extracts, it is rich in proteins and Omega-3 fatty acids. Moreover, it has been developed with the help of 3D food printing technology and can be prepared just like the real thing. You can steam it, fry it, you name it!

The scientific team spent over two years researching new process technologies and ingredient compositions. Additionally, two patents for these new technologies have already been applied for and the new product is set to be available in stores starting in early 2023.

Fish and seafood have been included in people’s diets in many parts of the world for centuries. But in the last few years, we hear more and more who are reducing or even eliminating all types of seafood from their diets. According to the OECD-FAO Agricultural Outlook 2020-2029, fish for human consumption is projected to increase by 16.3% in 2029 on a global scale. This projection does not counteract, however, the fact that more and more people now plan -at least on a theoretical level- to cut down on fish.

Since environmental campaigns, reports, and documentaries started highlighting the negative effects of the meat industry, people started cutting down on meat. Only in the United Kingdom, daily meat consumption dropped by 17% in just a decade. Well, this partly answers the question “why so many people stopped eating fish”. Big contributors to that might have been documentaries such as “Seaspiracy“, which bring the “dirtier” secrets of the fishing industry into light. Although such documentaries do take “ethos” into consideration – in other words, “how ethical it is to kill and eat fish”- the main focus is sustainability.

The 2020 Food and Agriculture Organization of the United Nations (FAO) report stated that “34% of the fish stocks of the world’s marine fisheries were classified as overfished” in 2017.

That is an alarming finding, since overfishing is by default unsustainable and linked to population decline and even extinction for certain species. In 2019, a report from the Intergovernmental Science-Policy Platform on Biodiversity and Ecosystem Services (IPBES) stated the following: “the health of ecosystems on which we and all other species depend is deteriorating more rapidly than ever. We are eroding the very foundations of our economies, livelihoods, food security, health and quality of life worldwide”. The report was based on a systematic review of about 15.000 scientific and government sources and linked the findings to overfishing practices.

Lastly, more and more people have reduced their fish consumption for health-related reasons. Deemed once the “healthiest food you can eat”, fish is now blacklisted by doctors. And the same goes for clams, oysters, and other seafood. Seafood is not only a common allergen or one of the main causes of food poisoning, but it is also known for accumulating microplastics and harmful heavy metals.

All of the above have created the need for high-quality and nutritious seafood alternatives that enable consumers to make the “switch” with the least sacrifices possible. Thanks to plant-based seafood products, consumers can continue eating the same meals as before by simply substituting the conventional fish products with the plant-based ones.

Founded in 2020 in Vienna, Austria, Revo Foods is a revolutionary start-up that develops and produces high-quality seafood alternatives that are both delicious and nutritious. Revo Foods’ first product, Revo Smoked Salmon, is already available in more than 16 European countries. Now, the new salmon fillet is entering the market in 2023!

Siegfried Kröpf is an Austrian Chef and gastronomy consultant with a focus on vegan cuisine. In the past, he has cooked for Queen Elizabeth II at the “Harbour Castle” in Toronto, and, among other things, he has been the executive director at the luxury hotel “Imperial”.